January seemed like an ideal time to come work on the school because it’s the short dry season in Gabon. No rain. However, we also worried that we would be interrupting classes in session. Some of us vaguely remember a loose calendar with students drifting back slowly. We knew we couldn’t be working on the school at the same time that students were in the classes.

What we didn’t count on was an enterprising primary school teacher by the name of Roland. On Monday, he returned from the provincial capital where he had gone to submit the results of the first term.

The village had identified an unfinished building for his classes during construction. By Tuesday morning he had cut the tall grass in front and around the building, moved the blackboards and school bell, and had the students carry the heavy desks to the temporary school. He divided the students into morning and afternoon sessions.

When we stopped by Wednesday afternoon, he was in the middle of a lesson about telling time using a clock with hands, with a picture he had drawn on the blackboard.

Students missed one day of class.

I am fascinated with your project, guys. Wish I was there! How many kids attend the school? The folks at Highland are following and sending best wishes your way, Mary and John.

Thanks Susie. Wonderful that you’re with us, in spirit. There are 26 children now. We’ve heard that parents have sent their children to schools in other towns. There are supposed to be three teachers but two asked for reassignment. Our hope is that with a refurbished school, students won’t have to go away and with new teachers houses, teachers will stay. 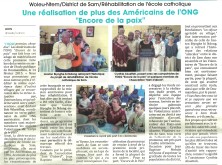