What a send off

The members of two different committees from the village of Sam organized a fete today to get the project started on the right foot.

At least 50 people filled the community center for the official welcome and send-off. It says a lot about the village that can boast a former minister, a senator, officials from the Ministry of Education, from the airport authority who all participated in the ceremony. There were speeches by Gaston Biyoghe and Giselle Ntoutoume as well as the President of the Resortissants de Sam Association (residents originally from Sam but living in Libreville.). John Dickson, on behalf of all those in Encore, thanked everyone and gave a brief history of our project mentioning how many people in the US and even Holland support this effort in Sam. Bob Weisflog also spoke, providing background on the Peace Corps in Gabon and on Marshall Erdman, the original architect for the school.

We were all thrilled that the US Ambassador Cynthia Akuetteh joined us. She had some wonderful, inspiring words of encouragement as well.

People present had fresh, fond memories of Peace Corps volunteers they remembered from Sam, many of them getting their start in the primary school that Peace Corps built in 1965 and that we will be repairing.

The first six to arrive from the states (and Egypt) landed during the week without problems. Terri Barber came first, followed by Doug Spatz, Claire Thiebault and Drew Howard. John and Mary Dickson arrived Friday, in time to join everyone for last minute shopping and the fete. Jean Pierre Lindeme, a student from Lastourville, and later teacher for many trainings, spent the day with us helping with telephones and purchases.

So this starts as a collective effort. Spirits are high and we’re running on adrenalin. Tomorrow a caravan of four cars takes off for the day’s drive to the village.

This photo is of the Ambassador Akuetteh (center holding folder) flanked by Encore volunteers and members of the Sam committees. 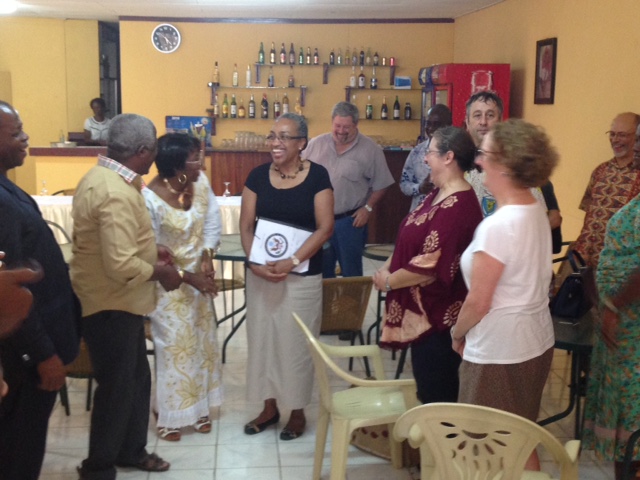 This entry was posted in Blog from Sam, Logistics.

4 thoughts on “What a send off”

Wow! This post so made my day! Kudos to
All you dedicated and hard-working RPCV’s of mine. Dear to my heart!

> dicksonjohn posted: “The members of two different committees from the > village of Sam organized a fete today to get the project started on the > right foot. At least 50 people filled the community center for the official > welcome and send-off. It says a lot about the village tha” >

Sounds like a wonderful start on the next phase of this project. Hope the energy can carry everyone through.