The obligatory end of project photo. We assembled in front of the school or at least as far as we could get it before our designated departure. By Saturday, the village workers will pour the cement floor and hang the door. That will allow students back in when school starts after the short break. Then the volunteers who arrive in August will paint and put finishing touches on the building as well as fix up the roof on the main school.

After the photo we joined about 50 villagers for a grand departure meal and a few speeches of thanks.

Let me use this farewell post to introduce those who volunteered at the work site. Left to right:

Monique. A teacher, who lived right next to the school. She gave up her classroom for our storage and work space and moved blackboard and chairs into her house. Forever with a smile, she and one other woman were most responsible for the daily meals that appeared for all of us at the site.

Cyril. The son of our hosts, he was the go-to guy with the saw. He was the most talkative and constantly animated the site. Slender but strong.

Emile (white hat). Another teacher who lived on the school grounds. Friendly and helpful.

Frances (green hat). Didn’t work at site but made all our brick blocks and helped with sand. Cheerful, older brother of Sherrif.

Sherrif (behind Frances in black shirt). One of three muscle guys. Christian is his name but everyone called him Sherrif, pronounced like the actor Omar Sharif. Funny, mischievous, kept site loose.

Guy (blue shirt). One of three masons but did everything. Lived and worked in E. Guinea for fifteen years before developing health issues. Came back home. Said he heard of our project and wanted to be a part of it. Probably most skilled, super nice guy.

Dieudonne (black cap). Older guy. Another mason. Quiet, a little on the dour side, but friendly and always helpful.

Eric (checked 1980s jive hat). Pitched in everywhere. Another of the laugh guys. Helped teach us Fang in between shoveling or drawing water or moving brick.

Medard (yellow shirt). Our foreman. Assembled and sustained team of volunteers who kept showing up. Definitely had his way of doing things but respected by everyone. From the village but works in Oyem.

Alphonse (squatting). Serious. Hard worker. Rarely squeezed a smile out of him. Smart and eager to learn mason trade. Muscle guy, did everything.

Jean-Jacques (green cap). Medard’s older brother. Mason with hearing loss and a leg he couldn’t bend, but that didn’t stop him from doing anything. Climbed up on barrel scaffolding and sat down to do footings. Cheerful, pitched in everywhere

Daniel. The youngest of the crew at 19 years old. Called himself Commando. Strong, hard luck case. Orphan, dirt poor. Came to us with a terrible would on his shin he got earlier from a shovel. Then he fell off a truck (not ours) and had serious wounds on chin, neck and arms so he had to stop working.

Missing – Papa Jean. Our host. 72 years old probably 80 pounds but jack of all trades. Had a huge chain saw that he used to cut planks from trees he felled and then to speed up cuts at site. Came on board fully last week to help with roof including climbing on top to nail and fill holes.

Working side by side these guys develops an intense camaraderie. We ate meals with them, we had a beer with them, we hung out and joked. Constant chatter between them, most of it in Fang, but sounded like a cross between trash talk and village gossip. They taught us cultural norms and overall made for a full, rich, rewarding stay.

Saying goodbye was more than a little hard. I expect some will be around to help complete the project when the second group of Encore de la Paix volunteers arrives. And we’ll be lucky to have them back.

Sent from my iPhone

Sent from my iPhone

Sent from my iPad

Love the descriptions of you community of workers and supporters!
Duncan

I can remember the mist losing ground to the afternoon sun in Gabon. With your description of your projects crew I realize how genuine were friendships with Gabonais named Dieudonne,Pascal, Etiene, Charlotte, Jean…such delightful Christian names. Great success and your postings are warmly received. Thank you for your continued endeavors in our corner of the great tropical rain forest. 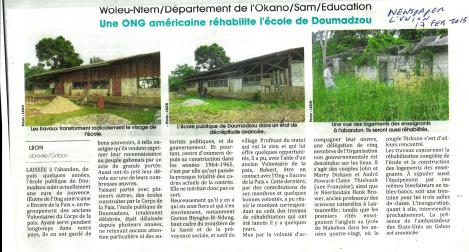